Climate – Is our climate changing?

Recently Greta Thunberg, the young Swedish climate activist has received significant media coverage as she brings her activism to the US. She met with officials and spoke in Congress. The highlight was the demonstrations in cities across the world by young students. There is a movement afoot whereby students take Friday’s off school to demonstrate and protest against the lack of action on climate change. They want their voices and their concerns to be heard. Is that not a fundamental aspect of democracy?

There has been some negative commentary in the media about Greta Thunberg which is quite unfair. She is a young girl and yet she is making a powerful statement; taking a stand about the total lack of leadership by most governments on the vitally important issue of climate change.

There is a lot of debate as to the ‘reality’ of human impact on climate. Yet 99% of scientists state clearly – and these are reputable scientists – validate that the climate is changing and that we are causing it.

I have found it quite fascinating that people with a certain ideology and loud voices call this vital issue a ‘hoax’ and directly blame China for the ‘hoax.’

Several years ago, I had conversations with people who worked for the Fraser Institute in Canada and they were adamant of the hoax. What struck me was that none of these people are climate and research scientists. They believe that by stating their ‘views’ it makes it real. It reaffirmed that I must continue to read the reports from scientists and weigh up their findings. I wondered about such adamant statements that were so directly opposite to all my own readings and research. I took time to look into the Fraser Institute and discovered that much of their funding is from the Charles and David Koch and the oil Industry – all of whom have a vested interest in denial of climate change.

In my own readings I discover that climate science is extremely complex. The weather systems that govern our climate are exponentially intertwined, inter-related, variable, dynamically changing, longitudinal, unstable and chaotic. The issue is complex enough from the scientific viewpoint; let alone the climate deniers who create confusion and misinformation.

Read some of the scientific findings. Educate yourself – it all starts with taking time to be educated and read studies from credible scientists. I bias towards NASA scientists who I tend to believe do not have an agenda. Take time to understand the science:

‘The Earth’s climate has changed throughout history. Just in the last 650,000 years there have been seven cycles of glacial advance and retreat, with the abrupt end of the last ice age about 7,000 years ago marking the beginning of the modern climate era — and of human civilization. Most of these climate changes are attributed to very small variations in Earth’s orbit that change the amount of solar energy our planet receives.

Scientific evidence for warming of the climate system is unequivocal.

The current warming trend is of particular significance because most of it is extremely likely (greater than 95 percent probability) to be the result of human activity since the mid-20th century and proceeding at a rate that is unprecedented over decades to millennia.1

Earth-orbiting satellites and other technological advances have enabled scientists to see the big picture, collecting many different types of information about our planet and its climate on a global scale. This body of data, collected over many years, reveals the signals of a changing climate. The heat-trapping nature of carbon dioxide and other gases was demonstrated in the mid-19th century.2 Their ability to affect the transfer of infrared energy through the atmosphere is the scientific basis of many instruments flown by NASA. There is no question that increased levels of greenhouse gases must cause the Earth to warm in response.

I love science and reading about research and scientific discoveries and climate science interests me for so many reasons; mainly because we have only one Earth and it’s our home. As Greta Thunburg says, ‘there is no planet B.’ And yet, we are so very destructive; we all share responsibility for this destruction. https://www.youtube.com/watch?v=H2QxFM9y0tY 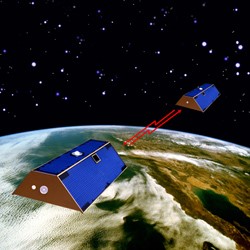 Instruments on NASA’s Terra and Aqua satellites have provided the first global measurements of aerosols in our atmosphere, which come from natural sources such as volcanoes, dust storms and man-made sources such as the burning of fossil fuels. Other instruments onboard the Aura satellite study the processes that regulate the abundance of ozone in the atmosphere. Data from the GRACE and ICESat missions and from spaceborne radar show unexpectedly rapid changes in the Earth’s great ice sheets, while the Jason-3, OSTM/Jason-2 and Jason-1 missions have recorded a sea level rise of an average of 3 inches since 1992. NASA’s Earth Observing System’s weather instruments have demonstrated significant improvements in global forecast skill.

These capabilities — nearly 30 years of satellite-based solar and atmospheric temperature data — helped the Intergovernmental Panel on Climate Change come to the conclusion in 2007 that “Most of the observed increase in global average temperatures since the mid-20th century is very likely due to the observed increase in anthropogenic greenhouse gas concentrations.” But there’s still a lot to learn about what the consequences will be. How much warmer will it get? How will sea level rise progress? NASA scientists and engineers will help answer these and other critical questions in the future.’